Gina Raimondo, US Secretary of Commerce thanked “Jurin” for congratulations message upon assuming new office, declaring readiness to work with Thailand and ASEAN for post-pandemic growth through expanded trade and investment. 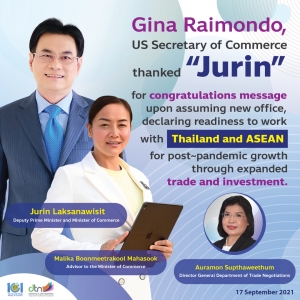 Mrs. Mallika said “the letter from the U.S. Secretary of Commerce, indicated that the U.S. Department of Commerce showed the readiness to work with its partners in ASEAN and around the world to create economic opportunities through an expansion of trade and investment. The U.S. Secretary of Commerce also reaffirmed the long-last relationship since the United States and Thailand signed a Treaty of Amity and Commerce in 1833, formalizing diplomatic relations. At present, the U.S. is restoring its economy affected by the COVID-19 pandemic, and the U.S. Department of Commerce is ready to work with Thailand to boost trade and investment, and to promote economic ties between Thailand and the U.S. At the same time, the U.S. recognized the vital of a close cooperation with the Ministry of Commerce of Thailand to increase the trade values between both sides and to revitalize the regional and global economy.” 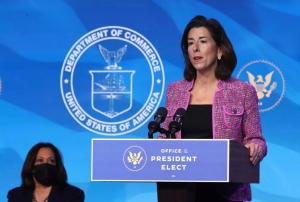 Mrs. Mallika also stated that Minister Jurin embraced the external trade policy that gave precedence to bilateral trade relation between 2 countries since he took over the office  2 years ago. As the Deputy Prime Minister and the Minister of Commerce, Mr. Jurin played a significant role in accelerating trade negotiations in many forums and has been widely recognized by other trade Ministers as well as other countries’ Commercial Attaché, particularly when Minister Jurin was the Chairperson of ASEAN Economic Minister Meetings and the Regional Comprehensive Economic Partnership (RCEP) Ministerial Meetings, which  comprised 10 ASEAN Member States and 5 FTA Partners, namely China, Japan, South Korea, Australia, and New Zealand.

“In these recent years, Thailand and the U.S. has continued their economic relations both bilaterally, through Trade and Investment Framework Agreement or TIFA, and regionally, through ASEAN-U.S. forum which focused on economic cooperation through ASEAN-U.S. Trade and Investment Framework Arrangement (TIFA) and Expanded Economic Engagement (E3) Workplan. The 2021-2022 Workplan was recently adopted this month covering key topics such as Digital Trade, Trade Facilitation, SMEs.” Mrs. Mallika said.

Mrs. Auramon Supthaweethum, Director General of the Department of Trade Negotiations, Ministry of Commerce, added that with Mr. Jurin’s policy to accelerate external trade, the trade value between Thailand and the U.S. hits 971,031.83 million Baht in the first 7 months of this year, expanded 6.19% from the same period last year. The total export from Thailand to the U.S. accounted for 715,092.87 million Baht, expanded 18.71% and Thailand’s  imports from the U.S. accounted for 255,938.96 million Baht. The Thai exports to the U.S. included computer and parts, rubber products, vehicles and parts, jewelry and steel and steel products. Thailand’s imports from the U.S. covered crude oil, chemical products, electric circuits, machinery and parts and electrical machinery. 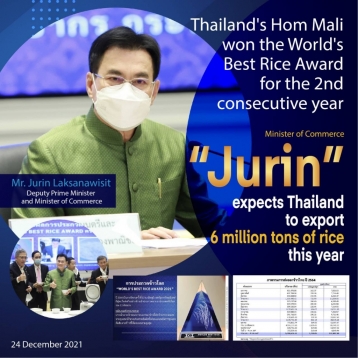